"Among the most sought-after of all vintage lightweights. A few heretics claim they are over rated. I say take a closer look and get a clue - or buy a Cannondale. Many Cinelli frames show exquisite mitering, smooth and even brazing, and lots of lug thinning. This is even true for many examples from the early 50's! Sure they have deep ugly file marks too - but that is only the surface! Add to the equation that many ride pretty close to perfection - at least as some would define it. Cinelli frames are also a visual feast with Italian style that just won't quit. In Japan, appreciation for Cinelli products is near cult-like. A Cinelli is an icon of cycling tradition. Sure, a few Cinelli frames have some lapses here and there - but don't miss the point. Cinelli frames defined the paradigm of a quality racing bike for decades. (ed. note: photo of 1957 Cinelli):

Around 1978 Cinelli was sold to the Columbo family. There are bikes with either the new or old logo's from this period. Until about 1980, while the graphics could go either way, the brake bridges and bottom bracket shells had new Cinelli logs making these bikes recognizable. From around 1980 until perhaps 1981 or 1982, Cinelli bikes with the new logo using a 26.2 seatpost and the lugs with 3 holes in each were very nice. Many do not consider these to be "real" Cinelli bikes, but they are at least as good as many of the earlier ones. Apparently either some very good builders from the previous period continued on, or work was contracted to outside builders of considerable talent. These bikes from this period deserve to be classics in their own right. Their geometry is upright, yet the ride is comfortable. These are bikes designed for the fast short distance riding so common in the United States. They, nonetheless, will handle mountain descents with ease as well! (ed. note: 2 photos of a 1982 Cinelli): 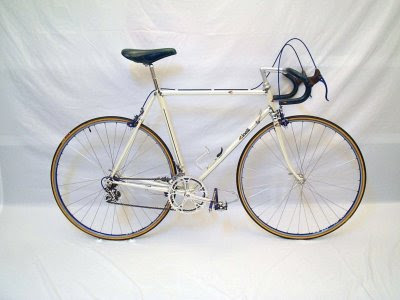 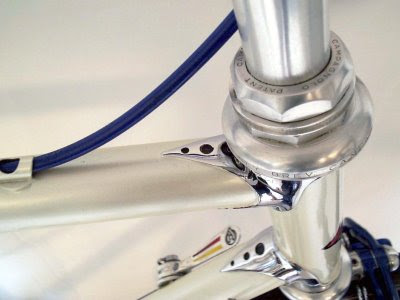 Sometime around 1983 it all ended. The 26.2 sleeved seat lug was replaced wit a different cast model that used a 27.2 post. The familiar 3 hole lugs were gone as well. Quality during the following years took a pretty heavy hit as well. Many examples didn't even have chrome lugs. By the late 80's quality improved and chrome lugs returned. It just, however, isn't the same."

ed. note: after posting this article a reader informed me that it was actually written originally by Michael Kone, and later appeared at the Harris Cyclery website under "Michael Kone with Sheldon Brown".