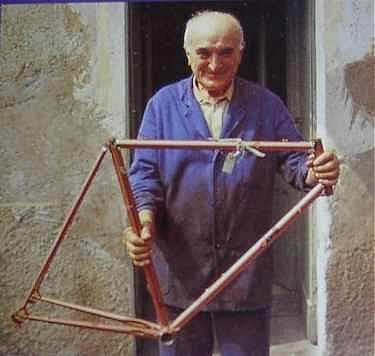 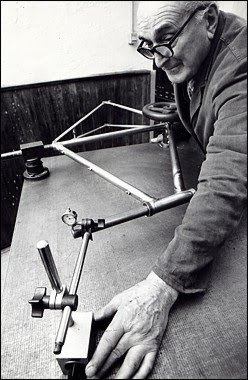 Luigi Valsasina, framebuider for Cino Cinelli is referred to in a previous article, "A Visit with Cino Cinelli":

"Cinelli's frames were as limited in models as they were in numbers. Early on, he produced a relatively economical sports bike, and he also dabbled in track bikes and tandems...... but, his enduring classic, the staple of his frame production, was the legendary Super Corsa road model. Produced with relatively few changes from 1947 on, its ride and durability are part of cycling lore.....

The fabled frame was the result of Cino's yen for a more rigid design. To this end, he conceived sloping fork crowns and the peculiar "fast-back" seat post-bolt system. Early on, the hired a Bianchi frame maker, Luigi Valsasina, to assist in frame production. (Now 85 (ed. note: in 1986), Valsasina left the firm a few years after Cinelli's own exit). Cino recalls how his technician initially resisted such an unorthodox design. Cino, having an order to fill for the great Fausto Coppi, instructed Valsasina to build two bikes for the champion--one a traditional configuration and the other Cino's new design. Both framebuilder and racer were duly impressed with Cino's alternative, and the Super Corsa was born."

Photos: coortesy of CINELLI ONLY reader

I can be contacted at veronaman@gmail.com
Posted by Angelo senza la o at 5:28 AM