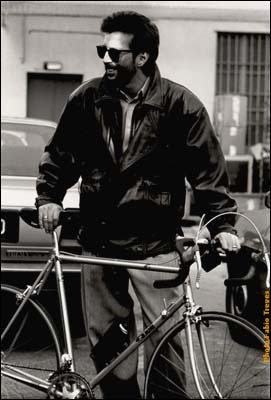 "In northern Italy on a pleasant day, the roads are filled with bicyclists: many in racing gear; whole squadrons of teenagers on training runs; pairs of fathers and sons; lone middle-aged or white-haired veterans. For others, cycling is a more practical matter, a way to get around. Housewives hang shopping bags from their handlebars; old men carry melons to market, and children pedal to and from school. Bicycles are very much a part of the Italian scene, especially in the less mountainous parts of the central and northern regions.

This strong commitment to the bicycle fosters a lively industry in Italy. And with the country's tradition of fine design and workmanship, it means that Italian bicycles are among the best in the world. In a good many American bike shops, the top-of-the-line model on display in the window is likely to be Italian. Even if the frame is different, the parts will probably be Campagnolo, an Italian label recognized around the world. Such a bicycle - a Bianchi Vittoria, for instance, with all Campagnolo parts - might cost $900 or so, and the top-of-the-line Centenario is priced at about $2,500.

So if you are a cyclist and are planning a trip to Italy, you may want to consider buying a bicycle there. Shopping for one can be a welcome change of pace from sightseeing, and besides, since cyclists and shop owners are a friendly group as a whole, you may find their enthusiasm inspiring.

If you decide to explore the Italian bicycle market, there are some things to keep in mind. First, you are better off shopping in a larger city in the North where bike shops are more numerous and more used to dealing with foreigners. The Milan area, an important center for the cycling industry, probably has the most bike shops and the widest choice available, but you could also do well in Bologna or Florence. Rome is a possibility as well, though because of its congestion it is probably not a city you would want to cycle in. Remember also that bike shops, like most other shops in Italy, are generally open only from 9 A.M. to 1 P.M. and from 4 to 7 P.M.,and a good many close in August, the country's traditional vacation month.

The cheapest bicycles ($100 to $200) are the solid, three-speed ones that most Italians use to get around town. They are sturdy and durable, but also heavy. Then there is a whole range of bikes for amateur racers who want some speed as well as lightness and durability at affordable prices. There is a large market in Italy for these bikes, and they are also the best ones for the American interested in recreation or touring.

Prices vary according to the quality of the frame and the parts. Your first question should be about the frame (telaio) and whether it was handmade (artigianale). Handmade frames cost more than those assembled in a factory, but since bicycles with handmade frames are still reasonably priced by American standards (as low as $250), it may be worth your while to pay for the better workmanship. Another question should be about the tubing. Columbus tubing is the lightest and is used in most handmade Italian racing bicycles. This kind of tubing requires careful handling, since too much heat in the braising process can weaken the frame joints. Look for clean lines, and if the builder is not well known, check his reputation among cyclists or mechanics. High-quality tubing is also made by Reynolds, an English company, and by some Japanese companies, but Italian bike builders are very loyal to Italian products, so you are not likely to come across too many imported frames. Note that Columbus or Reynolds tubing should be labeled as such on the frame; an unmarked frame is probably made of a cheaper Italian tubing.

After the frame, you need to examine the parts, especially the derailleur (cambio) and the brakes (freni). With a Campagnolo derailleur and other fittings, you can be sure of the best quality and also of finding replacements in the United States. Finally, you should make sure the rims and tires are the appropriate ones for you. Racers use a tubeless tire known in the United States as a sew-up and in Italy as a palmer or tubolare. These are generally not advisable for recreation or touring, for they puncture more easily and are tricky to mount. So if you are buying a racing model, ask for normal tires with tubes (normale) and for rims that fit them.

Those looking for a well-built frame of high-quality tubing and good parts - and willing to spend $350 to $750 - have many manufacturers to choose from. The particular maker does not matter much. You might as well let color, style or the feel of the bicycle be your guide. However, for the best buy, stay away from names you may have seen in the United States. since these manufacturers tend to charge more than others for the same Columbus tubing and Campagnolo parts.

The one area in the cycling market that the Italians seem to have neglected is touring. Young Italians have not been too interested in traveling by bicycle. Though this may be changing, in general it seems that Italians prefer to travel by car or train. Until recently the lack of interest in bicycle touring has meant that anyone who wanted to see Italy by bike had to come fully equipped. To some extent this is still true, especially in the south, where the bike shops are less well stocked. Elsewhere the situation is improving. For light touring, any of the lightweight amateur racing bicycles will do, and in many shops in the north you can find adequate (if unsophisticated) front handlebar bags and rear panniers. For more serious touring, you will need a touring bicycle with a more flexible and comfortable frame. You might also prefer to bring your own bags and a rear free-wheel with a large (34 or 36 tooth) sprocket. The largest sprockets available in Italy have only 30 teeth, which is not adequate for heavy touring over hilly terrain unless you have thighs like some Italian racers.

Sending your bicycle back to the United States is less of a problem than it might appear from the other side of the Atlantic. If you want to take it with you on the plane - for no extra charge if you count it as a piece of luggage - it must be boxed. You can box the bicycle yourself if you have the tools to dismantle it. (Boxing requires removal of the seat, handlebars, pedals and front wheel.) Boxes are found at most shops, though you should call ahead to make sure some are available. Most bike shops will box the bicycle for $15 or $20. Another option is to buy an airline bag specially designed for bicycles, which costs about $50. Many shops will also ship bicycles to the United States by air freight. Shipping companies charge by volume, but the cost still varies from shop to shop: about $150 to $175 for an assembled bicycle, $75 to $100 for an unassembled one.

Another problem may be language, yet it need not be too much of a problem. In many shops someone usually speaks some English. But if no one does, it is relatively easy when discussing a bicycle to use fingers for numbers and otherwise demonstrate your ideas. A little Italian, however, can go a long way. With a few key words and phrases, you'll quickly win friends among cyclists and shop owners.
In buying a bicycle, it's useful to know that at least one shop, Cinelli in Milan, accepts credit cards. Others may take them next summer, but don't count on it. Some shops may accept United States currency if they are not too busy to figure the conversion, but you may not get as favorable an exchange rate as you would at a bank. Milan Detto Pietro (8 Viale Monte Santo; 653-173) has a wide selection of bicycles and accessories.

Cinelli (also known as Gran Cicilsmo, 45 Via Folli in Lambrate on the outskirts of Milan; 215-1643) has handmade and factory-made bicycles, touring equipment and books (in English) for touring.

If you have the time and some knowledge of Italian, you might seek out some of the smaller, independent frame builders in the Milan area. Ask around among cyclists and shops for names and addresses.

Bologna: A. Villa (10 Strada Maggiore; 221-716) has a large selection of bicycles in all price ranges as well as some touring equipment. Patelli (1 Via Matteotti; 353-848) makes bicycles to order and specializes in racing equipment.

Photo: from my collection (not published with story): Eric Clapton in 1988 picking up his Cinelli in Milan.

I can be contacted at veronaman@gmail.com
Posted by Angelo senza la o at 10:31 AM