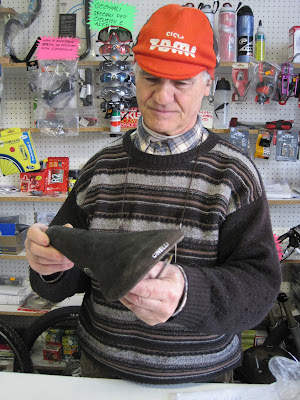 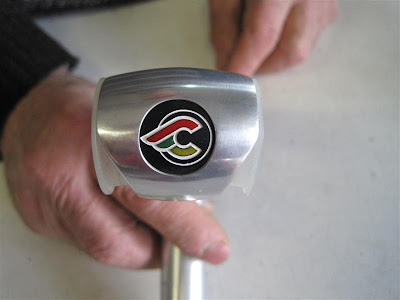 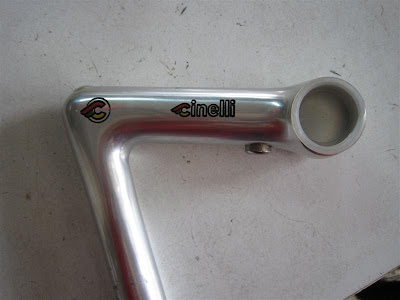 Larry Theobald, and his wife Heather, are the owners of CYCLE ITALIA, www.cycleitalia.com, and are currently residing in Viterbo as they prepare for the 2010 bicycle touring season. Do visit their website and blog. Larry was kind enough to undertake an interview today with Serafino Tomi of Cicli Tomi. Grazie mille, Larry. Here is Larry's report:

Interviewed by request of Angel(o) of Cinelli Only and the Italian Cycling Journal, who supplied a list of questions for Tomi.

Before we get to the specific questions here’s a bit of background – Serafino Tomi of San Martino al Cimino (near Viterbo) wanted to learn how to build frames in the mid-70’s. He called and wrote to a few builders up in Milan. Cinelli offered him a job after a lengthy telephone conversation. He commuted to Milan each week, returning to his wife and children on the weekends. Tomi worked at Cinelli for approximately five years. He still regards Cino Cinelli as sort of a demi-god of cycling. Over and over I heard “grande uomo” prefacing “Cinelli”. Of course in Italian grande means big, but in this case it also means grand. Serafino still exhibits great respect and admiration for Cinelli and credits him for most of what he learned and later put to use making his own frames under the TOMI name through 2003. He was happy to speak of his great friend and mentor but limited his comments to his tenure there and was unwilling to speculate on what may have happened before or after.

What can you say about the numbering (serial) system? After the frames were built the numbers were assigned by someone in the front office. We simply stamped the numbers into the frame using individual number and letter stamps and a hammer.

Did Cino Cinello himself build frames? Yes, he built a few frames though he was busy during my time there (1975-80) with new ideas.

What makes Cinelli bikes special? At that time there were big bike factories like Bianchi and Atala, making low-priced bikes for general use as well as racing machines. Ex-racer Cino Cinelli made only racing machines using the highest quality tubing from Columbus along with other high quality parts – if he couldn’t find them, he designed them and had them made. He was committed to artisan work rather than large-scale manufacturing and every bike (during my time) was made in the Cinelli workshop. No matter what decals might be on the frames, many Italian (and other) racing teams raced on frames made by Cinelli. One time a big team came to Cinelli with an order for the next season. He explained he could not provide the bicycles and recommended a new young builder who made good bicycles. His name was Ugo DeRosa.

Do you have information on brothers Giotto or Arrigo or 1940’s Cinelli bikes? No.

How many frame-builders were there at any one time? During my time there were three or four of us cutting and mitering tubes and assembling the frames before they were brazed up by one brazer.

Did each builder build a complete bike? See above.

Were Cinelli’s made to order or made in stock sizes to sell? We made a batch of size 50 one day, size 54 the next, etc. Columbus respected Cinelli so much that if special tubing was needed for an extra large frame, Columbus would supply it to us but most were made in what were stock sizes, produced in small batches.

Why did Cinelli use 26.2 seatpost? Strength and reliability. The larger seatpost requires more material be removed from the lug, making the entire area of the frame weaker. There is nothing magical about 27.2, with the tubing and lugs available at the time 26.2 simply made for stronger frames in the seatlug area.

Were the frames painted at Cinelli? No. The brazed frames were cleaned and filed/sanded before being sent to the painter. All of them were then painted metallic gray. This was Cinelli’s signature color in the same way Legnano’s were light green and Bianchi’s sky blue (celeste).

Any all-chrome Cinelli frames? Not during my tenure.

Subcontractors before 1983? Did you know of Montelatici? During my time ALL Cinelli bikes were made at the Cinelli workshop, there were no outside makers though there was sort of an agreement that workers at Cinelli could come in on the weekends and make frames for themselves, limited to two a week. I don’t recall the name Montelatici, sorry.

Innovations such as bivalent hubs…were these made at Cinelli? No, I saw them and other products like the famous M71 pedal, but they were made elsewhere.

After 1983 it has been said that frames were made by Giovanni Losa. Is this correct? Losa worked with me at Cinelli. During that time all frames were made in-house. I don’t know what Losa may have done later. Once Cinelli was sold, everything changed.

Another story said Mario Camilotto built frames in the early 1980’s, do you know anything about this? No. I don’t recognize this name. I know only about the time I was actually there, from 1975 – 1980.

After the questions were answered, we talked a bit more. Tomi showed me a cherished original Unicanitor saddle and told of it being quickly copied. Masi had some copies with his name on them which damaged the previously friendly relationship between Cinelli and Masi somewhat. (Photo shows Serafino Tomi holding the saddle)

Tomi was able to learn brazing while at Cinelli though he brazed only when the regular brazer wanted to school him in the skill, usually when Cinelli was not around. He showed me torch tips of various sizes and explained that many builders use a tip too small, which concentrates the heat too much. He feels the entire joint should be brought to the right temperature before the brazing rod touches metal. The molten rod flows into the joint thoroughly and rapidly with this technique with less distortion compared to heating concentrated areas with a smaller torch tip.

He next pulled out a near-new Cinelli stem (photos above). He explained it was used on one of his Milan show bikes to show his respect for his friend and that he and his wife had stayed up past midnight before the show painstakingly painting the colors into the pantographed logo Serafino had carved into the stem. He even painted the cap that covered the hole in the stem and claimed that prior to this, the Cinelli logo was a simple silver on black, only after being pleased with the Tomi design did Cinelli add the colors to his logo! Tomi later pantographed his own TOMI logo onto stems, chainrings, brake calipers, etc. as was popular at the time.

Serafino also told me he made steel track handlebars while at Cinelli. He regarded the bars and stems, along with the M71 clipless pedal as prime examples of the forward-looking mindset of designer Cino Cinelli.

Serafino himself also claims to be one of the first to braze cable stops onto the head tube rather than use the more-conventional shifter mounts on the downtube once Ergopower and STI came into wide use. He also claims to be one of the first (and perhaps the first) to braze the seatstays low on the seattube, making them shorter and creating a more twist-resistant rear frame section, a design he says was widely copied once a racer on one of these frames raced it in Tuscany.

In addition to the pantographing, Tomi did all the paint and decal work on TOMI frames himself – only chroming was performed elsewhere (up in Milan). He still is quite a perfectionist in many ways, showing me a prototype carbon fiber TOMI frame he’d just received with improperly placed decals and other flaws – something that most bike shop owners would not worry about but he was on the phone with the supplier making sure the for-sale frames he was to receive had the decals properly placed!


I invite you to contribute by sending in photographs of your Cinelli bike, illustrations, personal stories, and articles about Cinelli bikes and components."

I can be contacted at veronaman@gmail.com
Posted by Angelo senza la o at 9:30 AM