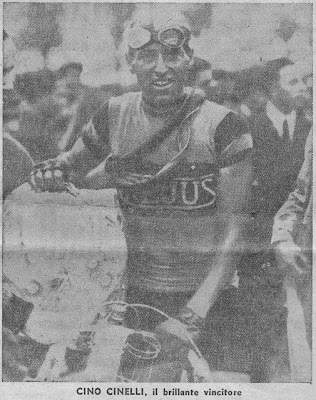 We continue, from Part I, with the recollections of Cino Cinelli of his cycling era, as told to the Gazzetta dello Sport in 1997.

SHIFTING - After the World War I and in the 1920s there was a fixed sprocket and freewheel: to change gears one must stop and turn the wheel. In Italy the first shifter which permitted non-stop shifting was the "Vittoria". Vittoria allowed the chain to be lifted, the rider back pedaled, and then shifted. In 1936-37 Vittoria added two wings to the chainstays to move the chain (ed. to change gears a rider would stop pedaling, reach down to a lever situated just above the front chainwheel, move the lever forward which took tension off the chain, and back pedal while simultaneously twisting a knob at the end of the tension lever. The knob operated the two wings that moved the chain to another sprocket. When all this was finally accomplished he could re-tension the chain with the lever and commence pedaling forward again). In 1938 Campagnolo appeared with a serrated rear dropout and a two lever system: one for unlocking, the other to guide the chain where you wanted.

CLOTHING - Wool on the roads and Scottish lisle for the track. The shorts were padded with deer skin and the an ointment was rubbed into the skin it to make it softer. The jersey also had a pocket in front. Cap and gloves were identical to those of today. No eyeglasses: we used those of motorcyclists with the canvas sides. I lit a cigarette and made holes in the canvas so as to prevent the lenses from fogging.

SUPPORT - The changing of a wheel for a simple puncture was forbidden, unless you broke the wheel or some spokes. There was a trick: after a puncture you would do a wheel change and then the mechanic would break some spokes in order to justify his intervention to the judges. As for replenishment, two or three in the race depending upon the mileage, still higher than that of today. To achieve full autonomy we began races with two tubes on our shoulders, a pump, two water bottles in front of the handlebars, and a flask in one of the jersey pockets.

I can be contacted at veronaman@gmail.com
Posted by Angelo senza la o at 10:55 AM