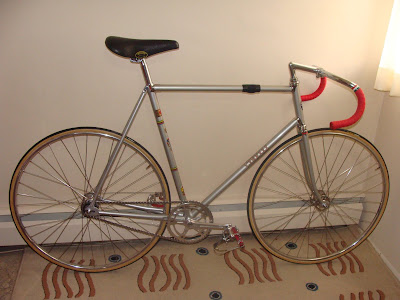 My thanks to Chris Norman who sent a photo of his beautiful 1973 Cinelli Pista. Chris writes, "A picture of my Cinelli as promised, year 1973, serial no. 2016. This bike was only raced a few times when new on the velodrome, then stored for 30 plus years. It is in as new and original condition, the only thing that as been done to it is the bar tape as been replaced to the same as the original, and the tires as being replaced as the tread pattern on the originals were coming unstuck from the tires."

It's comforting to know that gems that this can still be discovered, isn't it?

I can be contacted at veronaman@gmail.com
Posted by Angelo senza la o at 8:42 AM