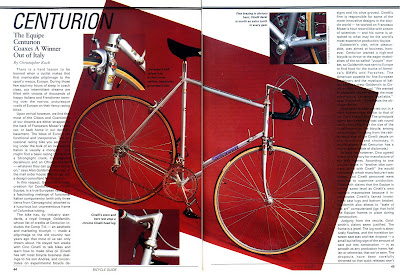 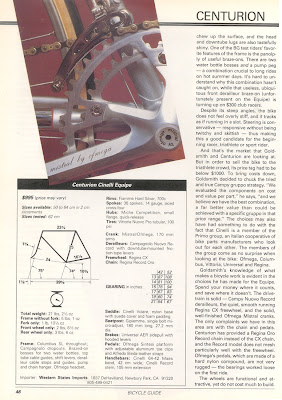 The above from Bicycle Guide, 1985. It describes the process by which the Centurion brand created an "Equipe" model with the involvement of Cinelli.

If the images do not enlarge sufficiently the key information is, "At long last Cino agreed to setup a factory for the manufacture of the bike frames. According to one source, "space in another bike company allied with Cinelli" (he would not specify the manufacturer) was leased, and Cinelli personnel were installed to supervise production."

Note: after publishing this article I heard from Alan Goldsmith. Among the things he said were, "In 1984, I was working on a new bike project with Cinelli. Andrea drove me to a small factory on the outskirts of Milan that he called Chirico (name of framebuilder), which I assumed was a separate business. I do believe it was a subcontractor and not something owned by Colombus." and also, "One minor error is that I spent around 2 weeks in Italy organizing various aspects of the program. But I only spent one day talking to Cino. It’s unfortunate that the writer didn’t really know about the inventions that actually made Cino famous. Those are well covered in your other stories. The real reason why the price fell from $1000 to $800 was the total failure of my project. My boss at Centurion was pissed and demanded that we dump these bikes ASAP. Now their worth more as rare exotic antiques than they were worth new."

Article images (click on them to enlarge) courtesy of Dale Brown, owner of www.classicrendezvous.com. If you still have trouble reading them go here (for a large pdf)

A Centurion Equipe (without its decals): 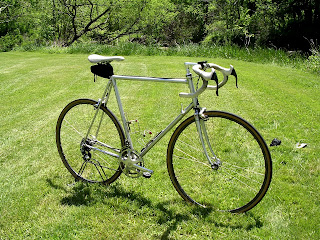 I can be contacted at veronaman@gmail.com
Posted by Angelo senza la o at 12:39 PM