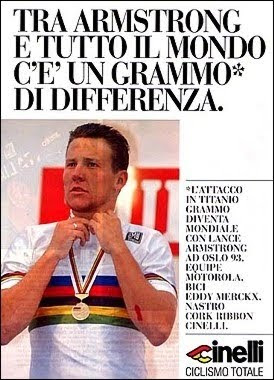 1993 Cinelli advertisement which says, "Between Armstrong and the entire world there is a "grammo" (gram) of difference". "Grammo" is the name of the Cinelli titanium stem that was popular in the 1990s.

The ad goes on to say that the stem was used by Armstrong in his win at the 1993 World Championship road race in Oslo, riding for team Motorola on an Eddy Merckx bike with Cinelli cork ribbon handlebar tape.

I can be contacted at veronaman@gmail.com
Posted by Angelo senza la o at 7:05 AM