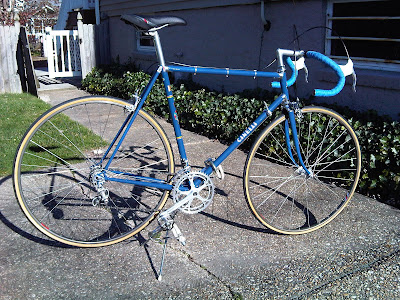 CINELLI ONLY reader Jeff writes in with his story of the restoration of his 1972 Cinelli, serial number 1954:

"My Cinelli frame was gift from an old friend who was no longer able to ride. He'd bought it new & raced it hard until about 1980 (+/- a couple years). When he hung the frame up, all the original Campy components had been stripped off and given away. The bare frame sat in a garage until about 10 years ago. My friend was about to throw away the frame but knowing I still occasionally rode asked if I wanted it. Of course, I said yes and thereafter the frame was bequeathed to my care.

When I received the the frame, it was un-rideable. The fixed BB cup was frozen solid and someone, in an attempt to remove it, damaged the BB shell. The frame had 2 dents, one on the down tube & one on the top tube. All decals were gone. The paint was badly chipped. That being said, the frame was straight.

Having not the immediate financial resources to send the frame out for repair, I sat on it until this past Spring, when I could no longer stand having this classic piece of Italian art stare at me forlornly in my basement. However, with a wedding to pay for, this project was going to have to proceed on a budget.

Without doing any real research into the topic, and being unaware that there was a thriving community of classic lightweight lugged steel enthusiasts who might have helped me in my approach to the restoration, I decided to proceed as follows:

First, the bike had to be rideable. Hence, the BB had to be repaired.

Second, I didn't want to see the frame deteriorate further. Since I was going to have to take the frame to a frame builder for the BB repair, it seemed to me appropriate to have the dents repaired & the frame re-painted. I had the frame painted blue (it's original color), but I did not specify an attempt for an exact color match.

The chrome was polished, but otherwise, left alone.

The frame came back to me in Mid-August. The repairs were excellent & the paint job was decent (given my budget). In building the bike back up, I had 2 criteria:
a)Components would have to come from my existing stock of parts.
b)Parts would have to be from the relative period of the 70's, but not necessarily bound to what would have been available in '72. Using existing parts was again, more of a financial decision, especially when I started pricing NOS (New Old Stock) Campy components on Ebay.

The second part however goes back to me early days in the sport. Specifically, I recall that without hesitation, we wouldn't think twice about "up-grading" a 2 or 3 year old bike with some new & improved (fill in your choice of component here).
Thus, I believe an early '70's bike is "period" correct with a mix of NR & SR components, 5 or 6 (or even 7) speed freewheels, etc.

Last, since goal #1 was for rideable bike, I made a concession to my age & elected to go with a more comfortable modern saddle & modern padded handlebar tape. I acknowledge that I should have probably installed an old Brooks saddle & wrapped my bars with cloth tape, but, I must admit that these modern additions make the ride much more enjoyable.

Some may argue that my approach to this GIBOTR (Got It Back On The Road) project was improper or incorrect, but I would argue that putting a bike that has languished for over 20 years back on the road is more important than any liberties taken to complete the project."

I can be contacted at veronaman@gmail.com
Posted by Angelo senza la o at 4:47 PM