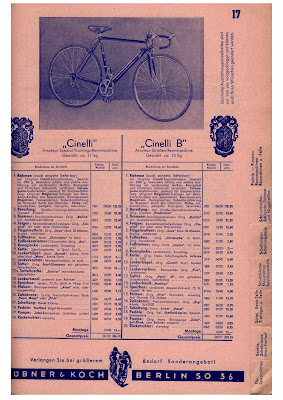 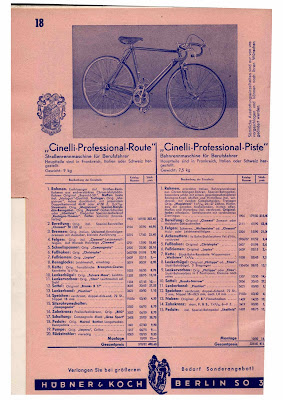 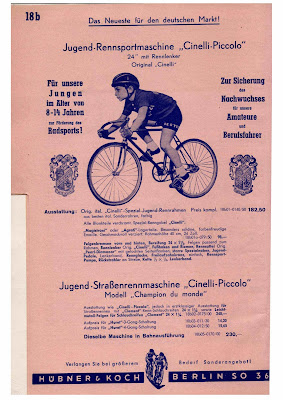 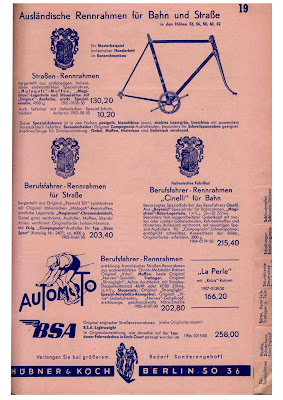 My thanks to Christoph in Germany for sending the above images (click to enlarge) and writing, "In looking in my catalog collection I browsed through a few Hübner & Koch catalogs.  Hübner & Koch has been for a long time after World War II one of, if not the wholesaler, in Germany to get the right racing stuff. As the 1951/'52 catalog has no Cinelli parts or frames in the contents it seems that Cinelli first appeared in 1953 (I am not sure if there was a 1952/'53 intermediate catalogue). Interesting that in 1953 they offered besides the three models called Cinelli (Amateur), Cinelli "B" and the Cinelli Professional what seems to be the later SC and also the Cinelli Piccolo. In 1955 this model for the kids has disappeared and the three models are now called A, B and C.I hope you can struggle through the German text."
Reminder: I invite you to contribute by sending in photographs of your Cinelli bike, illustrations, personal stories, and articles about Cinelli bikes and components. I can be contacted at veronaman@gmail.com
Posted by Angelo senza la o at 7:47 AM