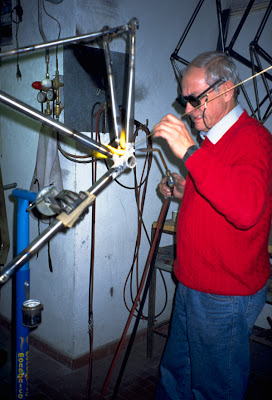 This from the "History" page of the Mondonico brand at BIKYLE, a high end bike shop in the USA:

"Antonio's father, Giuseppe Mondonico, opened a framebuilding shop in Milano in 1929. He was soon recognized by the Milan cycling aficionados as a builder with talent. Antonio grew up with bikes and frame building as a way of life. He has spoken of growing up with iron filings under his fingernails. When Giuseppe passed away there wasn't enough money to keep the Mondonico shop going. Antonio became the master builder for other renowned framemakers of the time. Over the years he supervised work for Gianna Motta, Cino Cinelli, and Ernesto Colnago. In the mid 1970's he reopened his own shop and again the world could get Mondonico bicycles."

I can be contacted at veronaman@gmail.com
Posted by Angelo senza la o at 6:28 AM