The Future of the Laser: Cinelli Hyperion, 1992 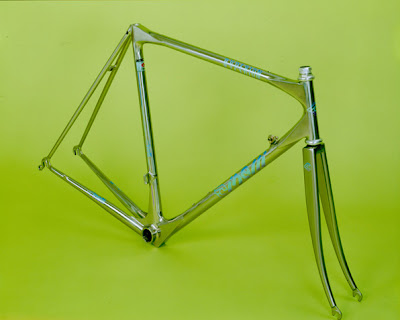 In 1992 the Cinelli Hyperion appeared in the Cinelli catalog. This was to be the Laser of the future. The Cinelli Hyperion was a sophisticated experiment in the development of the use of sheets of 3-2.5 titanium grade that would be molded around the tubeset joints and then welded. The goal was to reach a level of rigidity that could compete with steel with a weight saving that would not be insignificant. These methods led to the development of the legendary Cinelli Grammo stem (110g in 1992!).

"When Cinelli introduces a new material or a new construction technique the product is reviewed and redesigned to take advantage of the new possibilities offered, and in complete freedom. Thus, the Laser has an image of a very special bicycle, 'rationalized' for performance while at the same time being faithful to the fundamental lines of the frame but but re-proposed in a more clear and focused form."

I can be contacted at veronaman@gmail.com
Posted by Angelo senza la o at 6:06 AM