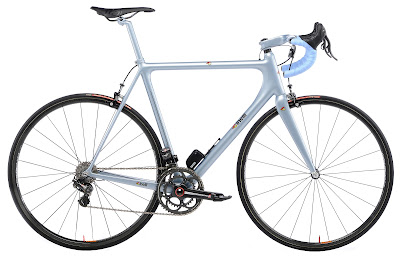 Yes, the newest version of the iconic Cinelli Laser is in carbon and is named the "Laser Viva" (above, click on image to enlarge). Coming in 2013.

More recently  Mr. Andrea Pesenti, the builder of the original Lasers, was involved in the creation of a small limited edition of steel Lasers ("Laser Nostra", see here). Now, Mr. Pesenti has been involved as well in the carbon creation named the Laser Viva which is said to have the same "look and feel". Photo of the limited edition "Laser Nostra", September 2011: 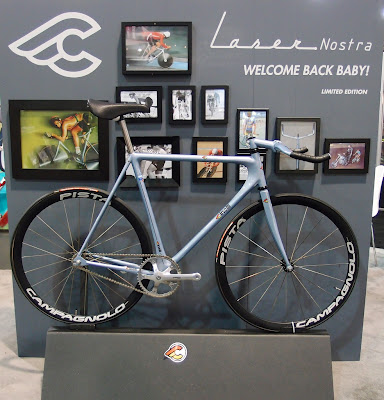 The Cinelli Viva is entered in the Bike MOTION Benelux Awards competition and Cinelli would like votes for it. If you wish to vote go here and this is the translated information you will need: - Surname - First Name - Choose: woman (Mevrouw)/man (Meneer) - Street + nr - Telephone nr - Email (used to contact for prizes) - Vote for the Cinelli Laser Viva 2013 ! I'd be remiss in not pointing out that a DeRosa 888 is also in the road category.

I invite you to contribute by sending in photographs of your Cinelli bike, illustrations, personal stories, and articles about Cinelli bikes and components. Thanks for stopping by. I can be contacted at veronaman@gmail.com
Posted by Angelo senza la o at 4:49 AM