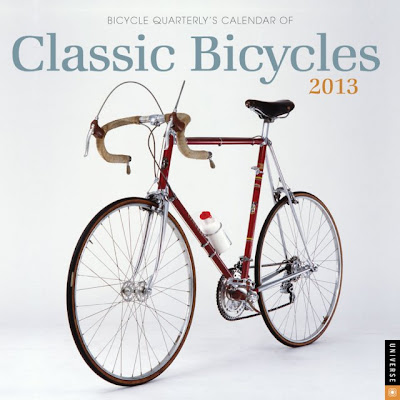 A 1965 Supercorsa, as built up by the legendary Spence Wolf of the Cupertino Bike Shop, graces the front of a new calendar being offered by Bicycle Quarterly for 2013. The "Classic Bicycles: calendar featuring studio photos of thirteen classic bicycles.

Most of the photos have been published in the books The Golden Age of Handbuilt Bicycles and The Competition Bicycle, but now you can admire them on your wall as you plan your year. Detail views and historic photos of the featured bikes, as well as brief captions, complete the calendar.

Priced at $ 14. Quantities are limited. For more information or to order your calendar, click here.

I invite you to contribute by sending in photographs of your Cinelli bike, illustrations, personal stories, and articles about Cinelli bikes and components. Thanks for stopping by. I can be contacted at veronaman@gmail.com
Posted by Angelo senza la o at 5:03 PM