The Largest Cinelli Ever Made? 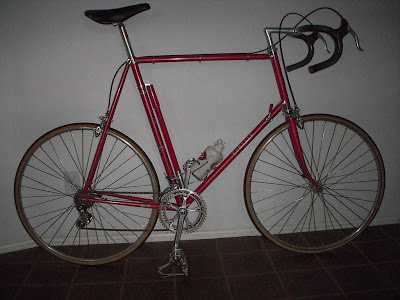 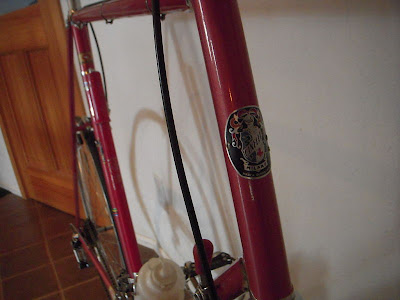 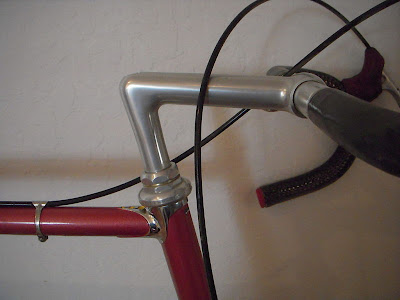 This very large, vintage, Cinelli is currently on ebay. It is 70 cm from bb center to top of the seat lug!

In the words of the seller:
"Well, look at this. A near mint, 70 cm 1975 Cinelli. Read that again and let it sink in...yes. 70 cm from bb center to top of the seat lug, the way Cino himself chose to measure his frames.

This is my beloved "second" Cinelli. It came to me about 18 months after my first one ("big orange" which I got in 1973). Very long story there. I've told it around the Camp-agnolo-fire a few times. Involves a midnight ride on twin brand new Cinellis through the streets of South San Jose, mildly wacked out (for medicinal purposes only, I can assure you).

Anyway, I so loved my first Cinelli and I was so paranoid that I would never have another opportunity to replace it (indeed, Cino pretty much retired shortly after making this one) that I ordered up what you see. It arrived here as one of the very first Super Record equipped bikes anyone had seen. However, Ti bb spindles and pedal axles were not too smart for a big guy and they were replaced. There have been other changes, like stupid me who sold the original SR RD to get the new modern one you see hanging. Dammit. But there IS the Portacatena! Look close, it's another one of Tullio's "Nobody asked for it, but we're making it anyway!" innovations. I'd be happy to discuss what is and ain't on the frame with a serious buyer.

I could go on. Here's the deal. Ebay is running the listing special; we both know that few people are tall enough, have fat enough wallets and enough passion to get a 35 year old classic bike with less than a thousand miles on it...but maybe. Face it, are there any others? Anything? I know some 66cm Masis and Bianchis got made many years ago (oh and there was a stunningly beautiful white 66 cm Pogliaghi in Peter Rich's Velo-Sport in Berkeley back in the late 60's..who bought that, I wonder?) but....are they like this, unscathed, almost unridden? Hanging for decades in quiet reserve? Waiting for their turn on the road?

Maybe there's a young sincere engineer (soon to be rich) working at some Silicon Valley startup and he admires what a classic steel bike represents. And brothers and sisters, forget Faliero, forget Ugo, forget... Mario. It was Cino who kept the torch burning during the dark post-War years and just about anybody who ever put their name on a downtube learned from him. In fact, when I was in Italy about 2003, I met Irio Tomassini who worked for Cino at the time Big Orange was made and he swore he remembered it, down to the color (and mostly about Cino bitching for having to build such a big damn frame). Yes. Memorable.

I can be contacted at veronaman@gmail.com
Posted by Angelo senza la o at 7:00 AM