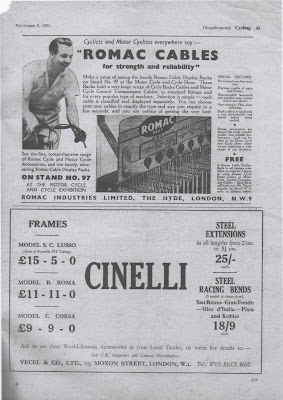 My sincere thanks to Gary, from England, who writes, "Researched Cinelli as a teenager racing in the early 70s. I was saving up for one but went for a Hetchins as there was a 3 months wait for a Cinelli my size.

I will will try to find the rest of the Cinelli stuff that has been stashed away for the last 30 years. This advertisement comes from the November 8, 1951 pullout supplement from the Earls Court cycle show."

As you can see three models were offered:

The ad was placed by the sole importer and general distributor for the UK,
VECEL & CO ,LTD 17 MOXON STREET LONDON W1.

Prices at the time were in pound shillings and pence.

I can be contacted at veronaman@gmail.com
Posted by Angelo senza la o at 2:51 PM