A Confused Supercorsa, and Some History 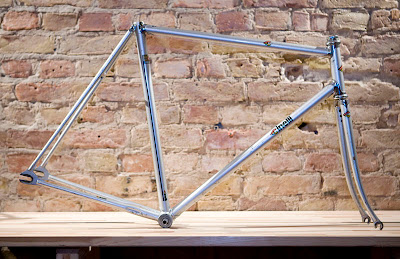 Last week an artist friend of ours wrote in with some photos of Cinelli track frame he had bought from Keirin Berlin (www.keirinberlin.de) on a recent trip . He wrote because several irregularities in the frame’s production (mostly the English threading of the bottom bracket shell) had caused him to wonder whether the frame was not actually a Supercorsa Pista but perhaps some export-only variant (such as the later Olympic and “Superpista” models).

There are in fact several “irregularities” in this frame which was produced in 1983, but they are full of character (at least in our eyes) and tell a shrouded, vague but fascinating story about a unique period in the history of Cinelli. In 1979 Antonio Colombo, having recently separated the bicycle specific tube manufacture Columbus – his brainchild – from the his family’s core A.L. Colombo steelery business, entered as a shareholder in the Cinelli company. He was allowed this by Cino Cinelli who had an eye towards retirement, and who as a long-time world-exclusive distributor of Columbus bicycle tubes had watched Antonio grow the business in recent years and saw that the two of them might have a vision and passion that could be compatible.

One of the first decisions Antonio took when entering the company was to change the logo, a “present to the company” to celebrate 30 years of business was how he sold the action to Cino, who was a little offended by the decidedly modern new logo (and the subsequent announcement of its implementation) Colombo commissioned from an, at the time young and upcoming architect, named Italo Lupi (legendary Bob Noorda also submitted a drawing which was rejected – “troppo triste!” explains Antonio, jokingly). Nevertheless the logo, unique in its style for the time, and probably the most widely imitated ever, was the singularly most modern logo in the bicycle world (which had at that point relied heavily on the traditional heraldic images for graphic representation of marques) was a concrete step towards the expansion of the company’s horizons into Italy’s then flourishing “design” industry – an attitude and style that has come to symbolise the modern Cinelli.

Nevertheless throughout this period production methods and designs remained more or less unchanged and Antonio brought existing products into a broader dialogue with culture through landmark exhibitions such as “Re-evolution: Design in Italian Society in the 80s” and began commissioning designs in cutting edge industrial materials already beginning to be applied in other sectors such as sports car design: of particular note the use of a particular rubber compound used by Ferrari in the Cinelli Domino stem. 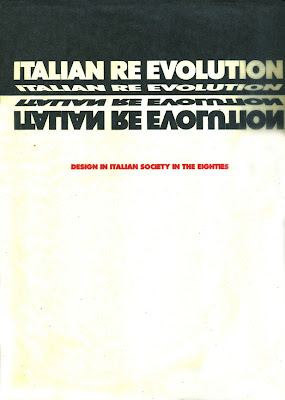 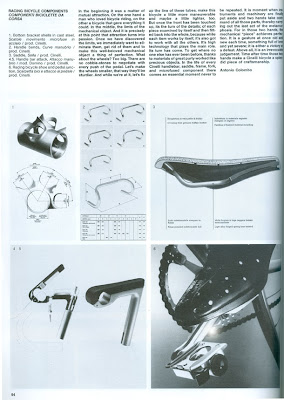 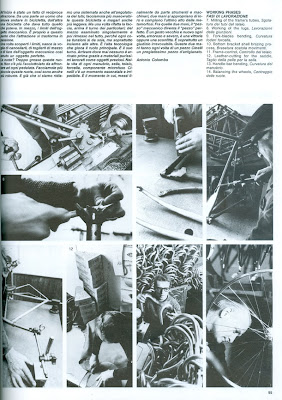 In 1983 Antonio Colombo took greater control of the company and became the majority stake holder, Cino Cinelli retired but his son, Andrea, stayed on as President for several years, collaborating with Antonio and the designers and engineers on several nascent projects of the period.

What makes the frame in the pictures so fascinating is that it is amongst some of first examples of the new Supercorsa frames with the full graphic treatment as designed by Italo Lupi. Up until the early 80s the new winged-C logo had only been used discretely on accessories of various kinds while the graphic scheme of all frames remained in traditional heraldic “Cino Formula” style of 70s.

Several small details in this frame’s paintwork, such as the Cinelli logo raised above the legendary pinstripe line on the downtube instead of on it, indicate how early, in fact, this frame is, in the history of the new Supercorsa. The same may be said for the use of the wordmark so low on the seat tube – essentially always obscured by the crank arm and chainrings and never visible to the person not on the bike – a fact which Cinelli only got “smart” to a few years later. 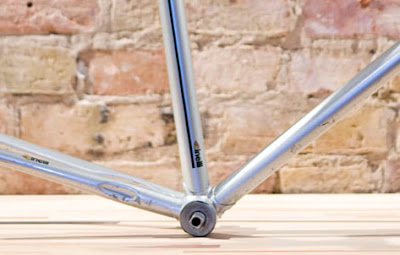 The other particularly interesting detail on this frame, and that which perhaps the framebuilding connoisseur notices first, is the lug set, which is of the sheet type, rather than investment cast. The 3-point lug set on this frame is the traditional sheet style as found on all Cinelli frames up until this point. In the mid-70s Columbus and Cinelli both began investing in investment cast “microfusione” lugs, which had far more precise tolerances of lug thickness and the possibility to produce more exact shapes allowing for faster more efficient construction and somewhat lighter frame weights (for the period), but at the expense of a fascinating, more intimate, evidence of workmanship on the frame (as much of the filing and shaping work had now been eliminated). Even though this new technology was available Cinelli continued to use the traditional sheet lugs, and very special seatcollar lug and seat stay plugs made from Schaffhausen cast iron (extremely rare at the time). These were an industry standard bearer for their kind of precision in production, for all supercorsa models – preferring the possibility for flawless elaboration and “thinning” of lugs as well as the complete liberty of tube angles in construction. In 1982 Gianni Gabella, designer of many landmark Cinelli products of the period, designed a new set of investment cast lugs for the Supercorsa; these were a little shorter, with only two “points”. These would be followed, shortly after, by another set of investment cast legs, still used today, with even shorter more rounded lug - emblematic of the modern Italian “sport” style – the seat tube lug and fastback stay with inlaid pearl logo above the bolt, as well as the Cinelli “spoiler” bottom bracket shell – the first bottom bracket shell to significantly resolve the problem of corrosion caused by water residue in the bottom bracket area of steel tubes – a piece of frame building equipment which is still in production (and working!) more than 30 years later.Close up of the unique seat lug made from legendary cast iron of Schaffhausen: 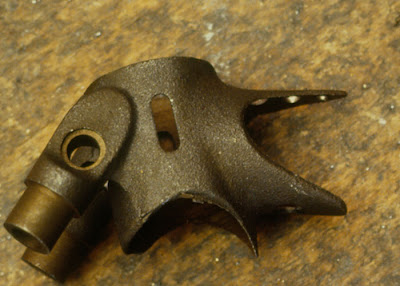 This frame, then, belongs to a small window of production where many various elements of the Cinelli company and race bicycle production in general were in flux; all its irregularities, should one know how to spot them, are full of information and obscure, delightful histories.

Thus this beautiful frame, which sits astride two eras of frame building and two eras of the Cinelli company is a delightful ambiguous vessel of Italian cycling history (for those who care!). 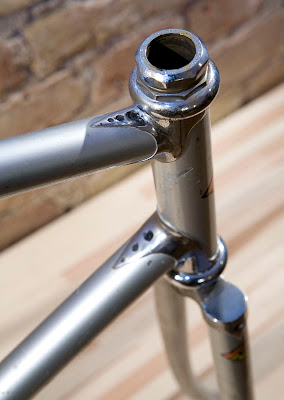 I can be contacted at veronaman@gmail.com
Posted by Angelo senza la o at 6:15 AM