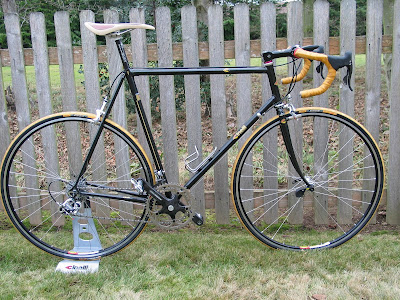 My thanks to Chuck C. for writing in about his 1983 black Cinelli. It is very much like the Cinelli Design featured yesterday except it does not have a gold badge. Chuck's Cinelli has the serial number 17 stamped on the bottom of the bottom bracket on the non-drive side.

Chuck writes, "Have been following the latest postings of 1983 Cinelli SC's. Well, here is mine. Purchased in 1983 from a shop in Florida. The owner stated he had receive 6 of the odd bikes, no chrome except the front and rear drop outs. It turns out the entire frame had been chromed and then sprayed with a translucent black paint. In the sun it shows well. This bike, as is the one posted, once had the black anodized Campy parts. Mine came as just the frame. In 1983 I dressed it with proper equipment for the time, Campy Super record, Cinelli bar and stem, Cinelli saddle, Fiamme hard silver rims with Clement sew-ups. Enjoyed riding it for 17 years but became very tired of downtube shifting and sew-ups. So, as you can see from the photo I have updated it to more modern Campy gear but trying to maintain the retro look, and love riding it much more.

The lugs on the bike are tapered paper thin, very well done, even for a Cinelli. This is my fourth Cinelli, 1965 SC, 1960 Pista, 1965 model B (still have) and the 83 SC. The story is that the first run of the year (mine is #17) were built for the year's trade shows and then sold as a entire bike or stripped down and sent to Cinelli dealers to sell. The 83 was a big transition year for the SC, mine still has the 26.2 post, three hole sheet metal lugs. Hope You enjoy another 83."

I can be contacted at veronaman@gmail.com
Posted by Angelo senza la o at 10:19 AM