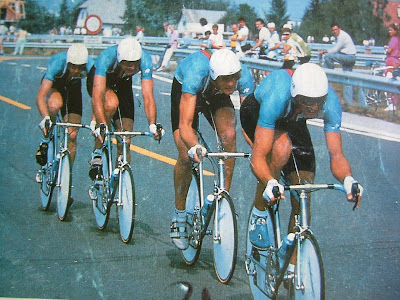 I was chatting with my friend Eros Poli about the bikes he rode in the Olympics and World Championships.

Photo: courtesy of Eros; he is riding in the second position at the 1987 World Championships (click on photo to enlarge) which was won by the the Italian team.

Eros, perhaps best known for his unlikely victory of the Mont Ventoux stage in 1994 at the Tour de France, now owns his own bike touring company based in Verona, Italy. See www.eros-poli.com for more information.

I can be contacted at veronaman@gmail.com
Posted by Angelo senza la o at 1:11 PM