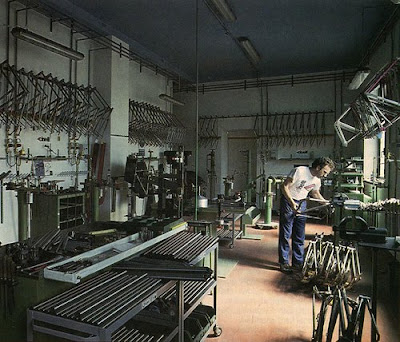 In this recent article I mentioned that it has been said that, ".....in the 1980's the Cinelli Supercorsa was made by an experienced Milanese framebuilder by the name of Mario Camilotto. The workmanship on these models is quite beautiful perhaps even nicer than earlier models. I do not know why Signor Camilotto stopped building for Cinelli and why later frames were made by Losa, also in Milan."

CINELLI ONLY reader Michael was kind enough to send in the above photo showing Mario Camilotto at work, surrounded by framebuilding equipment, tubesets, frames, and wearing a Cinelli T-shirt. Michael wrote, "The photo is of Mario Camilotto in the Cinelli factory of Columbus Steel in Milan. The only other thing I have heard about Camilotto is that he personally built every Cinelli Supercorsa from the time that Columbus bought the Cinelli brand, until Losa took over (in the early 90's?). The workmanship on my 1984 is quite clean."

Through a lead from another reader I learned that there were some video segments of Mario Camilotto at work embedded in a youtube video of Britsh framebuilders, the Taylor Brothers. Beginning at 4:40 in the video Camilotto can be seen several times building the "Ferrari" of bicycles. Definitely worth a look:


If anyone has additional information please email me at address below.

I can be contacted at veronaman@gmail.com
Posted by Angelo senza la o at 3:46 PM