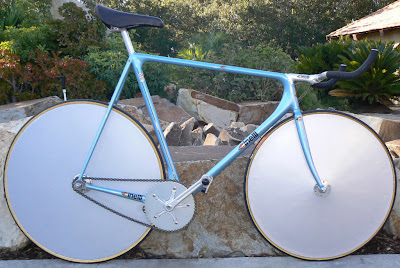 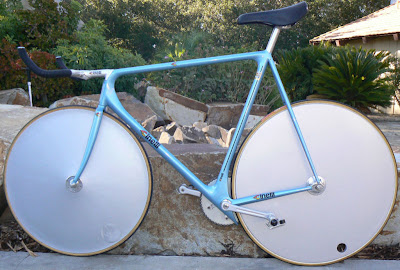 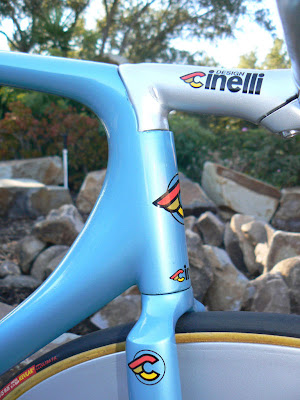 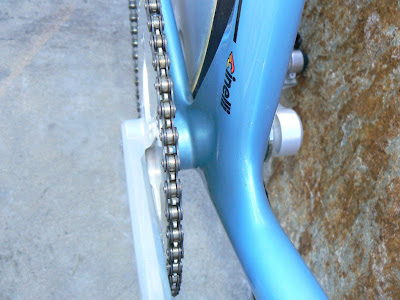 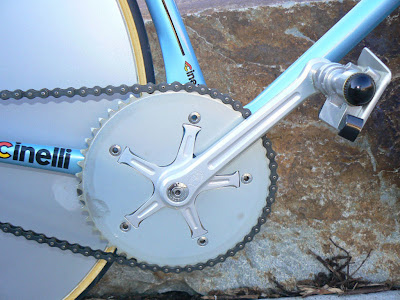 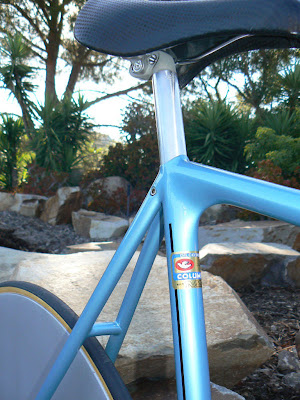 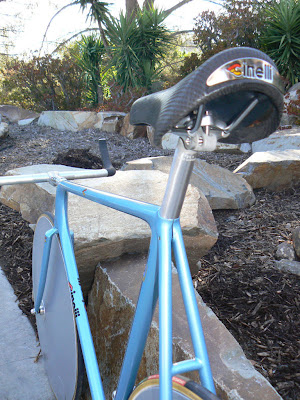 Note the only significant flaw is the minor defects on either side of the stem/headset interface from the bars flopping excessively side to side. Please see the stem photos.

Limited to 300 Lasers were produced, and all were custom. In 1984, the UCI decreed that aerodynamic modifications were not allowed, that is wheel covers, etc., and that aero features must be an integral part of the bicycle design and function.
Cinelli was the first manufacturer to incorporate the "Aero" concept into a production bike and the result was the Laser.

This 1984 Cinelli Laser Evolution was custom made by hand by Andrea Pesenti, designed by Antonio Colombo, and engineered by Paolo Erzegovesi for Lothar Thoms who is considered to be the greatest track kilo time trialist ever. In addition to his world and Olympic titles, his Olympic victory in 1980 was achieved in a time of 1:02.955, which through 1990 stood as the fastest time ever recorded. His victory margin in that stunning performance was almost two seconds – the most dominant victory ever in the Olympics. In addition to his Olympic gold medal, he won the World Kilometer Time Trial Championship four times between 1977 and 1981. After handily winning gold in the 1980 Olympics, which the US boycotted over the Soviet invasion of Afganistan, Lothar Thoms (GDR) had his sights set on the 1984 Olympics to be held in LA. It was not to be as the entire eastern bloc boycotted and the East German Kilo specialist and his custom Cinelli stayed home. The bike he had Cinelli build for the Olympics was quite special. Build of Columbus MS (multi-shape) tubing, the Laser embodies a synergistic integration of design and engineering into a work of art. This bike was professionally restored in 2003. Laser ~ Multi-shaped tube sections, webbed joints (no plastic filler in this one) the extended aero fin beneath the bottom bracket, sloping top tube and no-headset. The handlebars, fork and frame are integrated by a dual set of roller and needle bearings that engage into the head tube when the stem is tightened. Cinelli Laser Track Frames were limited to 300, and released in the 1980s. Each original model was built by hand by Andrea Pesenti, designed by Antonio Colombo, and engineered by Paolo Erzegovesi.
Specifications: 59cm ct., Campagnolo Pista Gruppo, Cinelli gear, Regina chain, Cinelli saddle, Cinelli clipless pedals (first ones), Vittoria 15mm tubular tires, Vittori/Campagnolo discs, Cinelli LA84 handlebar, Cinelli Design stem (note the stem angle is parallel to the top tube.

In 1948, a good professional racer with 15 years pedaling experience in the legs and the geniality in mechanics, decides to make use of his brilliant intuitions developed during the many miles run on every type of road surface, it’s Cino Cinelli. Some may remember him for his cycling career, many for his great gifts given to cycling, the modern handlebar, the first saddle with a plastic frame, the first foot clips, the first quick release pedals.
30 years later, in 1978, Cino handed the company over to a young entrepreneur in the steel tube industry with the bicycle at heart: Antonio Colombo.
His interpretation is different, perhaps more visionary, the eye sees beyond the present. So the company is transformed and the inventions of the “design made in Cinelli” begin to get known all over the world. The bicycle changes, or better, the vision of the bike changes. The bike is seen as total project. Laser is born, the lugs are abandoned and TIG welding is introduced in the frame. Furthermore it is the only Italian bicycle to win a Compasso d'Oro (1991) besides more than 28 gold medals in various Olympic games and World Championships. Competition is always in the Cinelli’s DNA. Its handlebars are chosen by Champions such as Lemond, Fignon, Hinault and Chiappucci, without forgetting Lance Armstrong and Mario Cipollini and also Di Luca, Freire and Simoni. Cinelli’s Rampichino (1985) introduce MTB in Italy, Cork Ribbon (1987) reinvents the bicycle ribbon, Spinaci extensions (1996) are used by over 800,000 cyclists, Bootleg (2000) challenges the rules and reinvents the concept of street cycling, Ram (2002) revolutions the handlebars. These are the roots of Cinelli, this is its present: today Cinelli is mentioned in the Dictionary of Italian Design (Rizzoli, 1999), in the ADI Design Index (2000-2001), and the Corriere della Sera newspaper calls it a cult object in the USA like Ferrari, Vespa, Lavazza or Fornasetti (9th January 1999).

Rumor has it that Cinelli will re-introduce the LASER in 2012."